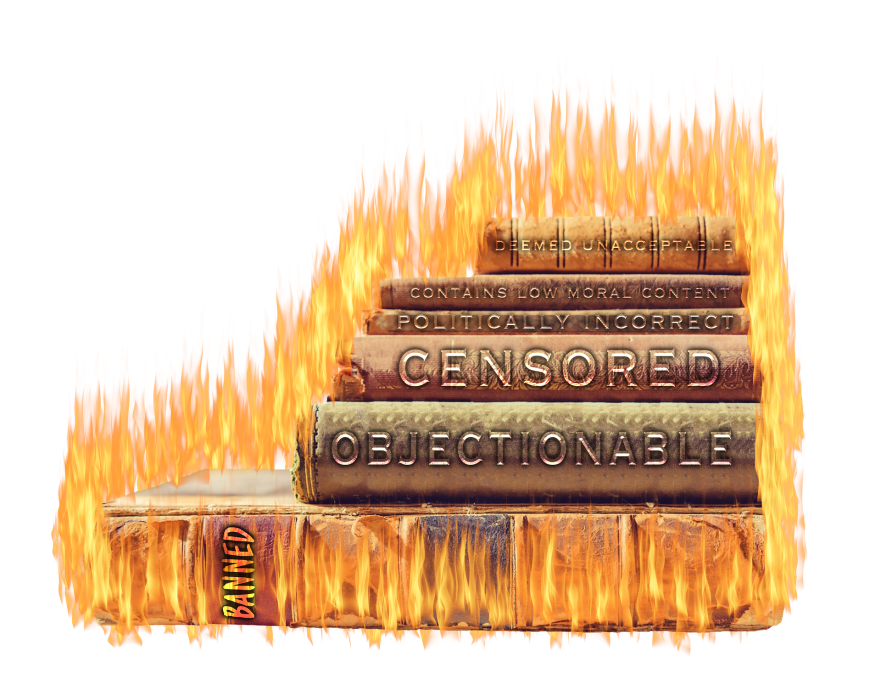 In the following discourse, I’m talking about “Corporate censorship.” The US Constitution only prohibits censorship by the government. It does not say anything about censorship by the private or corporate sector. But now we live in a day where, due to the success of the Democratic form of governance, the voice of the people has grown powerful. But when certain very powerful corporations which control the means of communication decide to engage in censorship, they take the place of Big Brother in manipulation, coercing the masses into accepting their viewpoint by denying them access to any other.

Censorship is a form of slavery. When a person is not permitted to express their views, then a very important part of that person – his or her self-expression – has been shackled, incarcerated and bound. Slavery is defined as being “subject to or controlled by” another person or a specified influence. So the one censored has been rendered the slave of those who oppose and inflict upon him forced or coerced silence.

Censorship  is a form of robbery. To the extent that Person A is silenced, Person B who takes away their voice robs Person A of their rights. But not only of their rights but of their influence, their opportunity to make a difference in the world. The one who is censored is robbed of the platform that was rightfully theirs. And the one who censors and robs them, gains illegitimate publicity riches, for the people who would have listened to Person A now have no choice but to listen to Person B.

Censorship is a form of murder. A body alone – bones and organs and skin – is not a person. A person is not defined by their possessions, their bank account or their hairdo. A person is defined by their personality, their unique thoughts, feelings and beliefs. When a person is denied the expression of these things which make up their very identity, a form of murder has taken place. They are denied the life of their unique self-expression. Their ability to function as a full human being has been taken from them. The one who engages in censorship therefore intentionally and with preconceived motive takes away part of another person’s life. This is a form of murder.

Censorship is the end of Freedom. When certain people decide that other people or viewpoints differing from their own, have no right to be heard, censorship is happening. When moreover, no action is taken to stop the censorship and allow the other side to be heard, then that nation and its people can no longer be called “free.” Freedom has ended because freedom of expression has ended. Truth has ended, because where only one perspective may speak, there is no limit to how much falsity it may entertain since it has no rival and no opposition may be raised against it.

Censorship is a declaration of war against Democracy. To the extent that one side perceives they have been censored, to that degree they will no longer trust the system because the system has collapsed. It has become totalitarian and authoritarian. For democracy to work, there must be trust that the law will protect the best interests of the people – ALL of the people. Censorship is a reversion to the jungle. It is the unapologetic violation of law and order openly declaring “I’m right and you’re wrong and I won’t allow you a defense.” This is corporate tyranny.

When those who hold the power of mass communication – media and social media giants – take sides and silence those with whom they disagree, it should be no surprise when those who are silenced – otherwise peaceful and law-abiding citizens – feel they have no choice but to use alternative means to make their voices heard.

As America hurtles down the path of every ruined and collapsed empire – the way of socialism, the way of corruption, the way of immorality and the way of censorship – We would do well to heed the lesson of history before it’s too late:

For whatever it’s worth, I have written what was heavy upon my heart as I see my nation being torn apart by powers that have been quietly growing stronger for many years, unnoticed and unchallenged. The time for lovers of righteousness to step up and make a difference has been ripe for decades but we were content to rollick in our cloistered religious gatherings and let the rest of the world go to the devil. Now it’s dire. Now it’s an emergency. The red lights and sirens are going off. Let those who know the Prince of Peace arise and seek options for peace. Let those who have divine wisdom awake. And most of all, before we act, before we speak, let us pray. Let us implore God to have mercy upon our nation. And let us receive His wisdom and then act according to prudence, in alignment with His will.

Leanna Cinquanta is a published author, motivational speaker and founder of WIN (We Ignite Nations) and WIN Life.