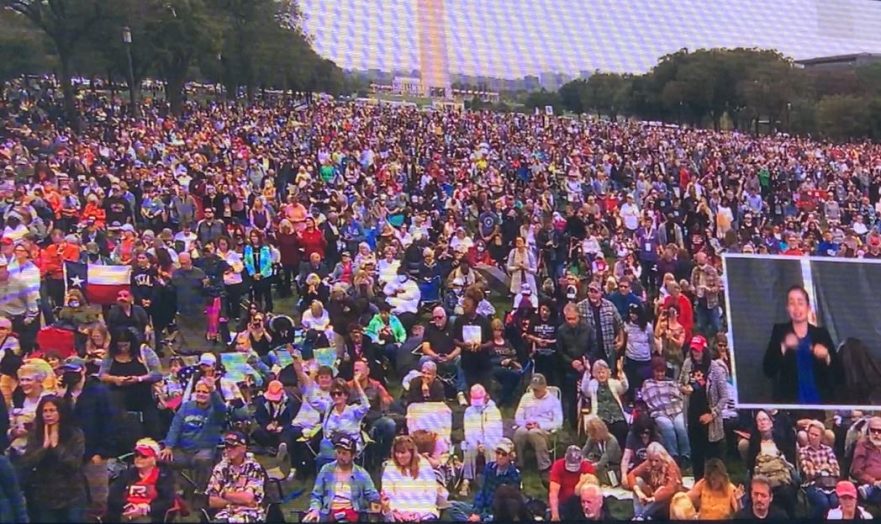 The ten days between the Jewish Feast of Trumpets (Sept 18-20) and the Day of Atonement (Sept 27-28) are a time of introspection and repentance. Sept 26th – 40 days before the US presidential election – happens to fall within this time period.

These are only a few of the reasons for which I felt led to arise from comfortable, peaceful, beautiful western Colorado and drive four hours over the mountain to Denver, then fly to Washington DC where I heard that violent rioters are a constant threat, to participate in a momentous solemn assembly called The Return on Saturday Sept. 26.

I promised to go LIVE on Facebook – which I did, briefly after walking halfway across the Mall out of the crowd – but learned that when 100,000 people are all in one place trying to use data all at once, the internet is fried!

The experience was an awesome day in which people did one of the most important activities to which we are called, but which has been rarely celebrated and barely practiced. Whether those filling the vast lawn knew it or not, they had come into alignment with a divine mandate and incredible power was about to be released.

In the time of ancient Israel, God ordained that prophets should be the advisors of kings. Those who spoke the heart and mind of God weren’t merely “religious.” Guidance from above was considered essential to a nation’s prosperity and peace. Prophets received the words of the Lord and then delivered those words to their king, and to the kings of other nations. God – speaking through the prophet – might advise the king to go to war, or to refrain from war. Most importantly though, prophets called the nation to repentance. They declared the sins of the nation and the judgment of God if the king and/or the people departed from His laws or hardened their hearts against His truth. The prophet also declared the grace that God would show IF the nation would repent.

In the New Covenant, Christ is our mediator. This means we have no further need of priests or sacrifices to symbolically atone for sin. This also means that hearing God’s voice isn’t limited to special people. Every believer can commune personally with God through the Holy Spirit.

But this does not mean we have no further need of prophets! Today, the “prophetic movement” is restoring and exploring the gift and function of the prophet. At The Return, I witnessed a thrilling alignment between a prophet, the people, a king and the Scriptures.

The “prophet” – Jonathan Cahn – assisted by others who collaborated, assisted and convened this incredible gathering – called a nation to repentance, just like the prophets did in the Bible. Here are a few highlights:

John Winthrop, governor of one of the earliest American settlements, the Massachusetts Bay Colony (1630), stood on the land that is today Logan Airport and made this statement:

“For we must consider that we shall be as a city upon a hill. The eyes of all people are upon us. So that if we shall deal falsely with our God in this work we have undertaken, and so cause Him to withdraw His present help from us, we shall be made a story and a byword through the world.”

But gradually America did just that – we “dealt falsely” with our God, departing from His moral laws. We have slaughtered 65 million unborn children to the false god of convenience and self. We have defiled and departed from Biblical marriage. We have removed God from our schools and from any mention in the Washington DC museums of history. We have denied that he had any part in the founding of our nation whereas it was upon the Biblical principles that our very Constitution was formed by men who were strong Christians or guided by Judeo-Christian backgrounds.

But what does that have to do with Winthrop and Logan Airport?

Get ready for a chill to go down your spine and your hair to stand on end: On September 11 2001, the two flights that were hijacked and flown into the Twin Towers – Flight 11 and Flight 175 – ORINGATED FROM LOGAN AIRPORT!

In his inaugural address to Congress on April 30, 1789, President George Washington said: “…the propitious smiles of Heaven can never be expected on a nation that disregards the eternal rules of order and right which Heaven itself has ordained.”

So on this special day, 40 days before the Presidential Election, around 100,000 people stood on the Washington Mall and cried out in prayer that our nation – this “city on a hill” – should return to the God who made her great. It was people who followed Biblical principles who initiated and fought for and gave their lives for the liberation of slaves and equal rights for people of all colors and races. It was people who upheld Biblical morality who brought forward the rights of women to vote. But then it was the same people who became complacent and sat back and allowed our land to be governed increasingly by that which defied God’s principles and disregarded His truths.

A PROPHET, THE PEOPLE, AND A KING

Just like in ancient Israel, a “prophet” declared a “solemn assembly” to which a significant cross-section of the nation responded. A melting pot of multiple churches and denominations, an estimated ten million including online participants, joined as one in united cry for God’s mercy on our nation and the world.

This was not a religious meeting! This was a legislative assembly, the people of the land exercising not earthly political power, but spiritual authority, calling their nation back to her Judeo-Christian roots, a return to Biblical morality by which God’s favor – expressed in peace, prosperity and purpose – may once more be enjoyed by all.

And then, the nation’s “king” – our President – issued a letter. Here are a few snippets: “On this inaugural national day of prayer and return, the First Lady and I join millions of Christians here in the United States and around the world as we turn our hearts to our Lord and Savior…. Following our ancestors footsteps we continue the firm reliance on the protection of divine Providence… our faith in God has guided us through these hardships and helped to unite us as one nation under God… As a country and as a people let us renew our commitment to these abiding and timeless principles… With reverence and humility we beg for His continued guidance and protection.”

I’ve provided below a couple snippets from the conference: A snippet of a call to repentance, The final 11 mn or so of Jonathan Cahn’s message, and the reading of the letter received from the White House.

Our faith MUST guide our lives, otherwise our faith is dead. Allowing our faith to guide our lives includes how we choose our leaders. Pray for God’s mercy upon our nation and for repentance to come across our land. And let us exercise our rights as citizens and choose our leaders according to that which aligns with Biblical principles – protection for the life of the unborn, marriage between a man and a woman, and respect for Israel.

Be a part of sustainable transformation!